This morning my husband was meant to be making drop scones for breakfast, but he's very much a follow a recipe person and can't adlib at all and I had made up some sourdough starter that he was meant to be using to make the batter with. It was one of these "I hate throwing away the sourdough starter" things from the every morning replenish and I had some spare and threw in some hemp protein flour along with some normal plain white flour and some honey just to see what would happen. Well it happened OK... boy did it happen. I don't know what it was it liked but the starter grew over the sides of the 1L measuring jug.

So yesterday I made up some drop scone mixture with it, adding an egg, some milk and a little more sweetness and this morning, he tried to make drop scones. They were a disaster and he called it a day and normal breakfast was resumed.

When I went down this morning to check on the sourdough bread that had been proving in the fridge overnight, I threw in some normal plain flour into the mix, some more honey to take away the really bitter taste that was in the batter and added some oil to make a type of soft sourdough with a roughly brioche type recipe. The dough was really soft and rolly and very very interesting to handle. It was a pour it out of the mixing bowl on to the work surface and knead it folding it repeatedly. It was lovely to handle but still needed a really sharp knife to cut it and 'pour' it into 3 different baking tins. I only had some sandwich tins and a 9 inch springform round tin available. This dough was way too soft to be on a baking tray.

I guessed at the cooking time, playing it by ear literally and now have 3 gorgeous loaves of bread that are really moist and soft and still have that sourdough taste! They will make for excellent 'dunking bread' during the week, if they last that long! Munchies have already eaten 1/2 of the first loaf! :laugh: 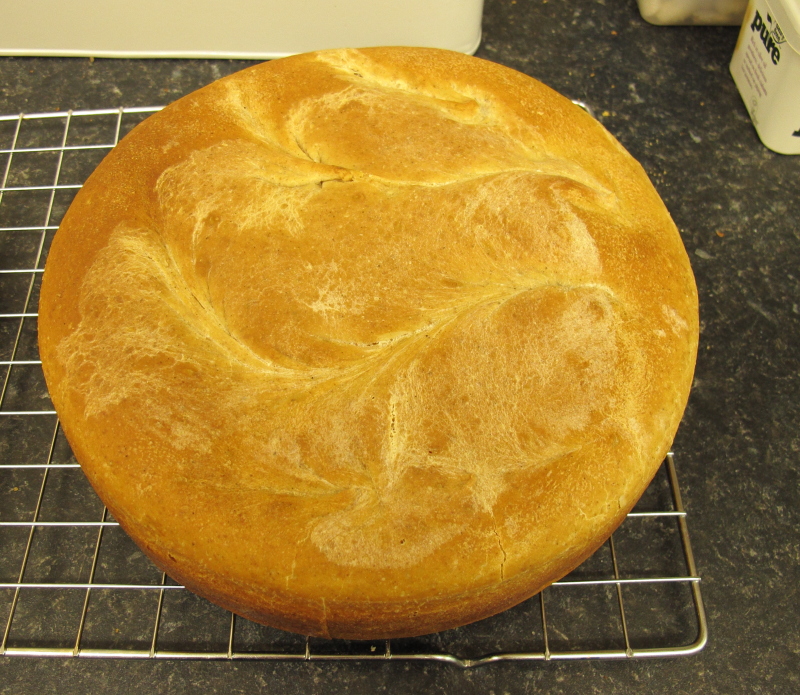 As you can see, the dough was that soft, that cutting it was impossible. All you could do was to draw patterns in it!
Ad

You must log in or register to reply here.