Flours - All Purpose vs. All the Rest

I regularly see recipes that call for specific types of flours, but I pretty much only ever have all-purpose flour on hand. Occasionally I'll have wheat flour that can be used, but that's about it.

Just how much am I hurting the quality of my food by not using the specific cake flour or bread flour? Are there types of dishes that I should really make sure to always use the right flour for?
Ad

According to Cooking Light, bread flour has more gluten so it makes the bread stretchier and makes it rise better. I haven't seen any difference when it comes to cake flour vs. all purpose flour. I've never made a bad cake just because I used all purpose flour.

I was using all purpose flour for my biscuits and they were awful. Then I switched to self rising flour, and my biscuits were awesome. So, somehow there is a taste difference between those two. I have always used bread flour, for my bread making. I just figured it would be better that way. I think you just have to test things out and see what works best for you. I never get technical with stuff, just trial and error.

I've heard that cake flour is finer than all-purpose flour, which helps absorb and distribute fats more evenly throughout the cake. I personally don't use cake flour, but I do use a lot of whole wheat flour because it's a little healthier. It's also heavier, though, so if you are modifying a recipe, you may want to add extra baking soda or baking powder. It's nice to know that self-rising flour does make a big difference. I agree it's just trial and error. It makes baking fun, right?

I have been baking for many years and have always purchased regular flour. Over the years, however; I have kept some whole wheat flour in my fridge and substituted part of my white flour with it. I have never had any problems with my recipes using regular flour and if a recipe calls for self-rising flour, I just add the needed baking powder/baking soda.

I have being using regular flour to do my baking from i'm attending high school and i can't say i've encountered any problem whatsoever as my products always turn out just great.
Ad

I try to use whatever flour the recipe calls for, but I'm not afraid of substituting flours if I don't have a particular type to hand.

I use all purpose (plain flour in the UK) for pastry, and most biscuits and cookies); I use cake flour (self-raising in the UK) for cakes - I love the fineness of this flour, and I find it gives a superior rise and crumb than all purpose flour.

I will always use bread flour for making bread. I've seen some recipes for bread that use all-purpose flour, but having tried it many years ago, it just wasn't the same.

I am confused by the 'wheat' flour reference - isn't most flour made from wheat, or am I missing something?

Since I've been watching a lot of baking videos made in the UK (Bakeoff, Mary Berry's solo shows found on YouTube, Cupcake Jemma) I see them using self-rising flour. While I used a mix of AP flour, baking powder, and baking soda (triple sifted) as a substitute, I'm not sure it has the same type of wheat / protein content / milling as British flour. I hear that Southern-style self-raising flour (such as White Lily) is made from a softer wheat - their web site says 100% soft red winter wheat. So it seems like that would be somewhere between a cake flour and all purpose. But again, is that equivalent to the flour available in the UK? I'm in the US South (Florida), so I'll have to look in the bigger supermarkets to see if they have White Lily. One more container of flour in the cabinet! (I hope it's a smaller bag.)

PattyCakes, I think a lot of people refer to "wheat flour" in two different ways - one when they mean whole wheat flour, the brown flour milled with the bran, germ, and all. The other use is to distinguish all flours derived from wheat from the non-wheat substitutes commonly available now for those with either wheat aversions or allergies.Gluten-free/what-free has become very popular in the USA, especially in cities. Alternative flours would include finely milled corn, rice, chickpeas/garbanzos, chia seeds, buckwheat (not an actual wheat as it turns out), oat, coconut, and any of the finely ground nuts like almonds which can sometimes be substituted for flours. I understand that also flour substitutes are used in extremely low-carbohydrate diets (Paleo, Atkins, etc.) mostly for coating and thickening, as they don't really eat breads and cakes.

At home (Northern Ireland) I use the flour the recipe calls for, usually self raising for cakes and some biscuits, and then a host of local flours we have (soda flour, wheaten bread flour).

I'm now in Mexico and the only flour available is plain flour. I've found it doesn't work very well with breads, and often even with baking powder won't rise enough when I make cakes. Locals have told me the best option here is using ready made bread and cake mixes- but I prefer to do everything from scratch.

I don't know why, but self raising flour seems so much less common in North America than the UK. Until we started getting Bake-off, I didn't realize it was so commonly at the base of cake recipes. Though I notice Mary Berry often adds more leavening to it for those all-in-one batters.

If you agree access to corn flour, or corn starch as we say in the US, you can use a mix of plain flour + corn flour, sifted together, to lower the protein and increase tenderness in a cake. The conversion is usually by volume, removing 2 Tablespoons from one cup of flour and replacing with 2 T of corn starch. I don't see it done by weight in grams but I guess it's about 1/8 volume, and even with different weights maybe try 10% corn flour and see if it improves?

I've been finding interpretations of recipes, even within English language, interesting. I follow some Asian YouTube bakers, as well as Gemma Stafford, raised in southeast Ireland, now living in California. Her YouTube has an international following so she gives substitutes and hacks that are interesting. Here's her emulation of cake flour. https://www.biggerbolderbaking.com/cake-flour/

-Daniel- said:
At home (Northern Ireland) I use the flour the recipe calls for, usually self raising for cakes and some biscuits, and then a host of local flours we have (soda flour, wheaten bread flour).

I'm now in Mexico and the only flour available is plain flour. I've found it doesn't work very well with breads, and often even with baking powder won't rise enough when I make cakes. Locals have told me the best option here is using ready made bread and cake mixes- but I prefer to do everything from scratch.
Click to expand...

Try ribboning your eggs for better rise. I use this technique all the time to get extra rise, especially in my gluten free cakes.

Fill a saucepan with a several inches of water. Bring to a near boil.

Place all the sugar and the whole eggs in a heat prove bowl. Whisk well to combine. Set the bowl over the pot of simmering water. Whisk continuously until the sugar dissolves. It's important to dissolve the sugar.

Immediately transfer eggs to the mixer bowl. With whisk attachment beat on med-low for a 1 minute. Increase speed to medium.

After 2 1/2 minutes, stop mixer and scrape down the sides of the bowl, AND the bottom. Continue beating for another 2 to 2 1/2 minutes.

The eggs will increase in volume, go from a deep yellow to a very light pale yellow. When you lift the whisk out of the eggs, the egg on the whisk should stream into a thick ribbon and pool in swirls on top of the eggs in the bowl.

If you're a brownie person, try ribboned eggs in your brownie recipe. I think it makes a better brownie. 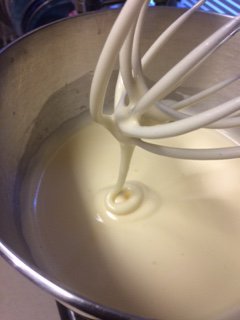 Nice. Similar to making Swiss meringue for buttercream, but with whole eggs? Would that make the brownies lighter and cakier rather than dense and fudgy?

Apocalypso said:
Nice. Similar to making Swiss meringue for buttercream, but with whole eggs? Would that make the brownies lighter and cakier rather than dense and fudgy?
Click to expand...

Yes, it is very much like a meringue, but with whole eggs. It works beautifully when you need some extra leavening. In fudgy brownies, ribboned eggs make them rise more. They are still fudgy, but a creamier kind of fudgy. The bite is different. The dissolved sugar also make the crackled top lighter and more delicate.

I tried it a few times in a chocolate chunk cookie as well. Wasn't anything extraordinary. But I think I just didn't care for that particular cookie because of the high butter content in it. It was Serious Eats J. Kenji Lopez-Alt's browned butter chocolate chip cookie recipe. Lopez-Alt does not dissolve the sugar when he ribboned the eggs. Rather, he let the moisture of the eggs and the heat from friction dissolve the sugar.

But when using ribboned eggs for leavening in a cake or cupcakes, the sugar must be dissolved before beating. I thought it was an on necessary step at first. But learned the hard way that the eggs will not hold their structure if the sugar is not dissolved. A collapsed cake sent that message home loud and clear
Ad

Norcalbaker59 said:
Try ribboning your eggs for better rise. I use this technique all the time to get extra rise, especially in my gluten free cakes.
]
Click to expand...

Thank you for this tip! I'll give it a go
You must log in or register to reply here.