How do you store your cooking utensils?

I'm in need of a good organization idea. Right now, ours are sitting in our cutlery drawer all piled on each other. It's aggravating. I needed to find something, yesterday, and had to take everything out, to find it. That system has got to go.
Ad

I use a metal container which is tall enough for utensils to stand in,handle down,you can see straight away what you are looking for.

Initially I bought this large utensil organizer tray that came bundled with all the common utensils. I got it at K-Mart I believe. However over time, I ended up replacing a lot of those utensils, which were cheap and flimsy, with higher quality ones which were also often much bulkier. Now I have a drawer packed with utensils, and the organizer tray is essentially worthless. In fact it's just taking up more space, and I'm considering throwing it out to make more room for the utensils themselves.

I like the idea of a stand up container, but then I would also start to get picky over which utensils I want displayed on my counter. Some of them are bizarre colors, or kind of beat up looking, and I would likely leave those hidden away.

Some of my utensils are stored in a large flower vase on my kitchen counter. Others hang up on hooks. It helps to store your utensils where you can see them and grab them quickly.

I have a plastic container that I'm going to wrap in cord or something to make it prettier to display. It's so full that you have to take something out to get at what you want.

I did a lot of searching on Pinterest and then went to Home Depot to buy the materials for my vision. We had our main spatulas, ladles, spoons, etc arranged around the oven and held up by those 3M plastic hooks. I worked nicely but there wasn't enough room to have everything hanging there.

So, I bought a thick piece of balsa wood that I'm going to stain the color of our cabinets. Then I'm going to attach it to the wall and use S hooks of various sizes to stagger the items. I hope it works because having everything on the counter and out of the drawer has made me happier. I just can't leave them on the counter top forever.

Unfortunately, removing those 3M hooks took the paint with them. So now I have to repaint the walls before I put up my contraption, I looked in the shed for left over paint and there is none. So, now I can't decide if I want to try and get a paint match or change the color all together. I don't know why things can't be simple. :-/

I really need to get a container to store some of mine on the kitchen counter, but right now mine are all shoved in a drawer is well. I have to dig each and every time I need something.
Ad

I store cooking utensils in a drawer. Keeping it simple saves counter space. Also, I always know where my big spoon, spatula, etc is. You won't find me hunting or searching for an item. 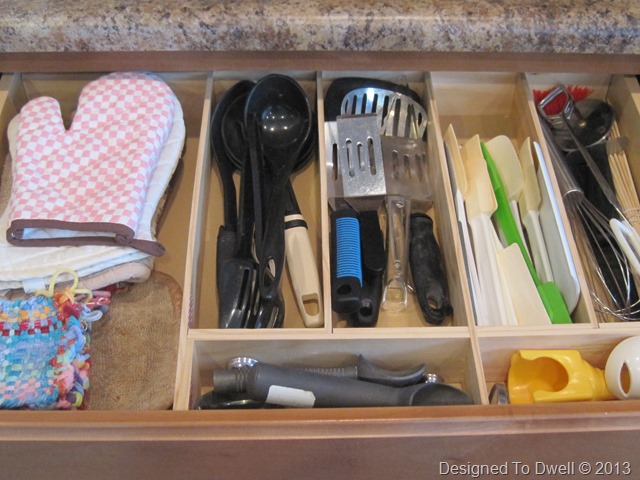 Right now, mine are jumbled up in a drawer. I keep meaning to buy a carafe of sorts to sit on the counter and place them in but I keep forgetting. It would definitely make cooking life a lot easier!

I found two XOX caddies at a discout store. They hold a huge amount of cooking utensils. athey caddies fit nicely in to my cabinets. I don't have any drawers that are deep enough to place all my spoons gadgets in to.

My apartment is an old Florida apartment built in the 60's ,so it still has a lot of kitchen drawers and a pantry. I just lined the drawers with retro floral contact paper and have my utensils in the drawers sorted by size.
Ad

Most of my kitchen utensils are stored in drawers however the ones that i use more often are place in a big jar that sits on the counter and there is also a hanger on one side of the kitchen wall where i hang the cute colored ones.
Ad

You must log in or register to reply here.