I have never been to the Hummingbird Bakery in London, but I have the recipe book and everything I've tried from it has always been delicious. My friend lives in London and she told me that the Black Bottom Cupcakes from the Hummingbird Bakery are yummy, so I thought I've give the recipe a try... basically they are dark chocolate sponges topped with a cheesecake mixture. Here's what they should look like (topped with frosting):

Looks nice doesn't it? Rich and chocolatey on the bottom, a thick layer of cheesecake in the middle, and frosting on the top. What's not to like?!

Now I would never think of myself as an expert baker by any means, but I am a dutiful recipe follower and usually things go well. However, before I even began baking, just looking at the recipe for these cupcakes is WEIRD. The chocolate sponge has neither egg nor butter!! Still I always trust a recipe so was keen to see it through to the end.

Here's the recipe - should make 12 cupcakes, but I only managed 11:

See, told you it was weird

You make the chocolate sponge base first. Once all the ingredients are combined you get a really thick, sticky and heavy mixture. It felt more like a paste than cake batter. The recipe says to spoon into the paper cases until 2/3rds full, but there is not enough mixture for this. I divided it as well as I could but was still one short. 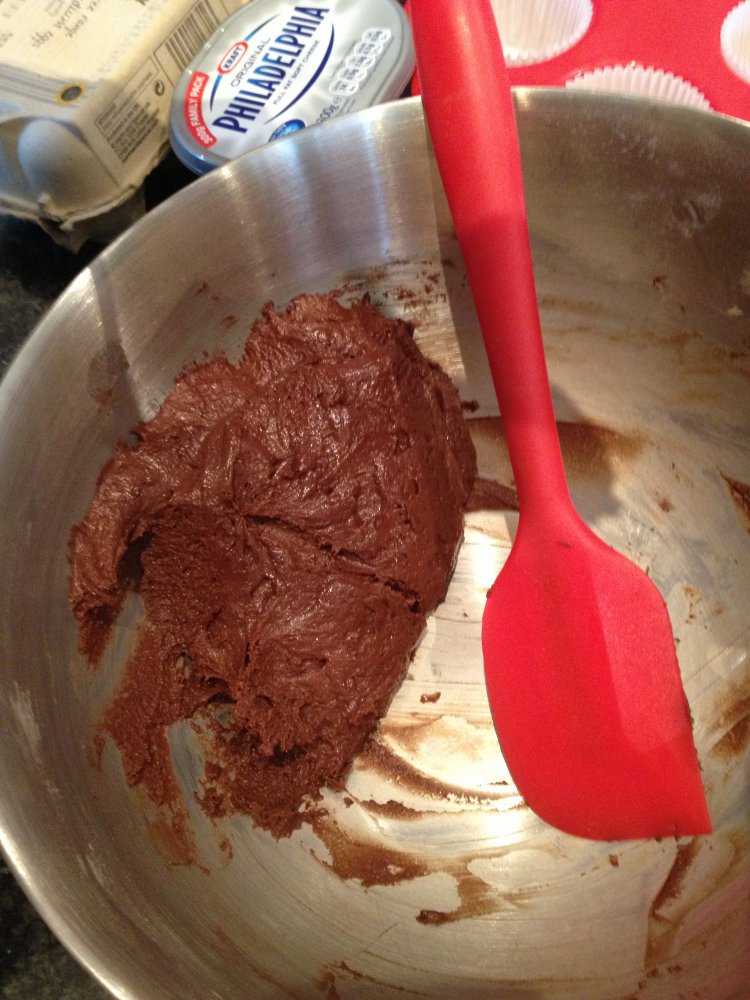 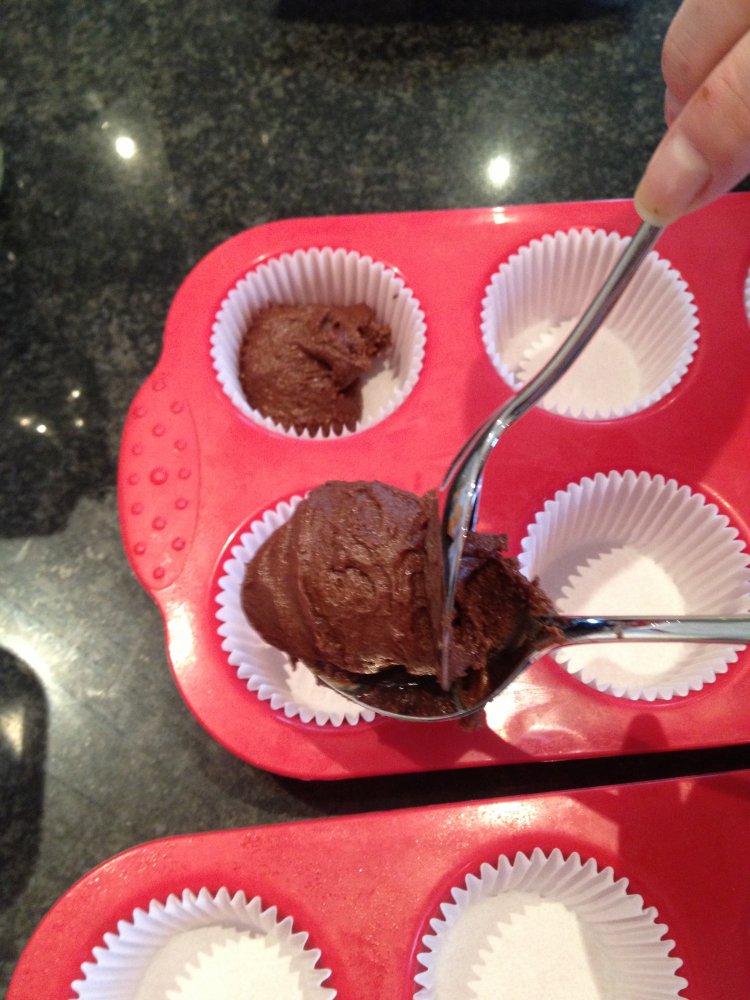 The next part is the cheesecake topping. The recipe says to beat all the ingredients together except for the chocolate chips until smooth and fluffy. This took a while (despite the fact it says not to over-beat), but I eventually got a thick mixture. However the thickness was only visual, when stirring it it just felt like a very light foam. Once this is done you top each cupcake with about a tablespoon of the cheesecake mixture and pop them in the oven for 20 mins at 170 deg C (325 deg F or Gas Mark 3). 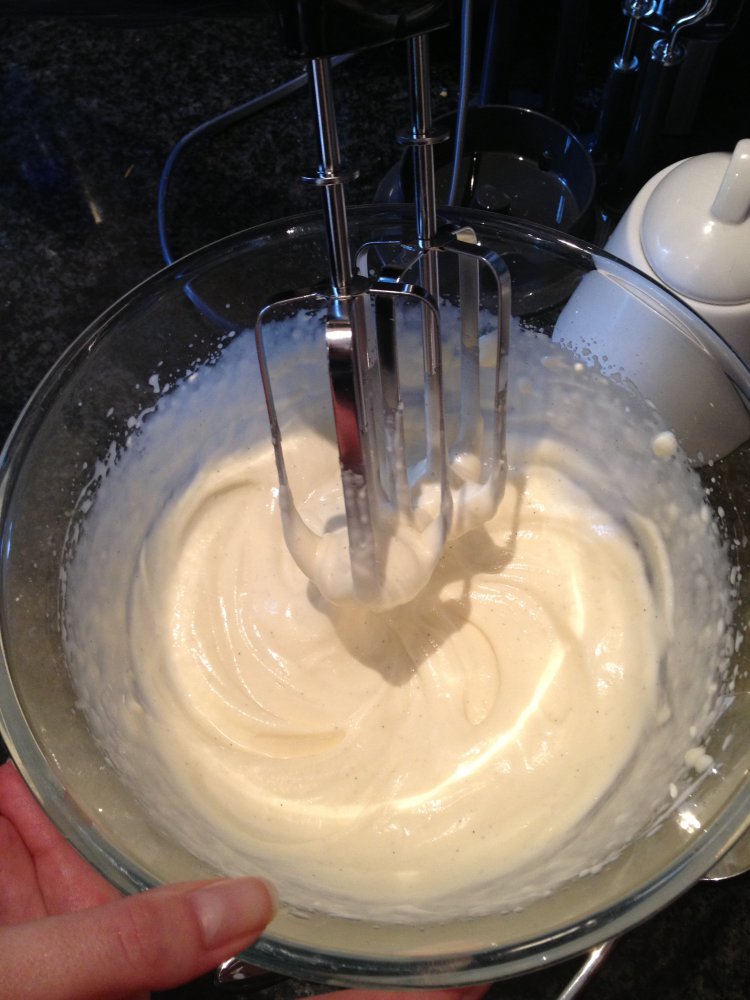 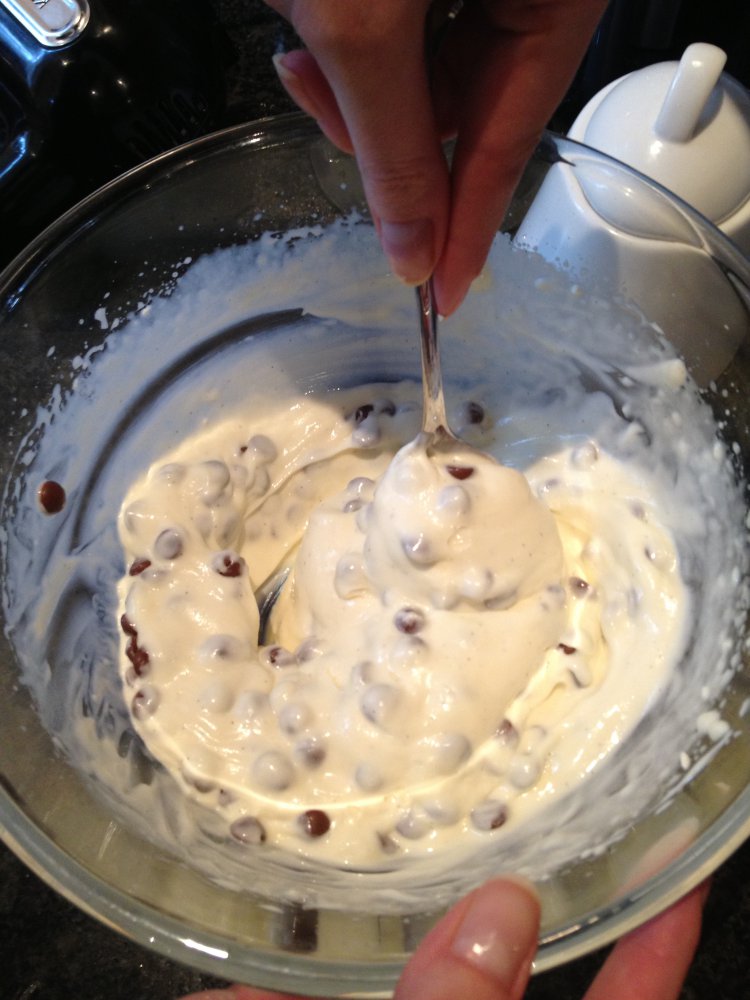 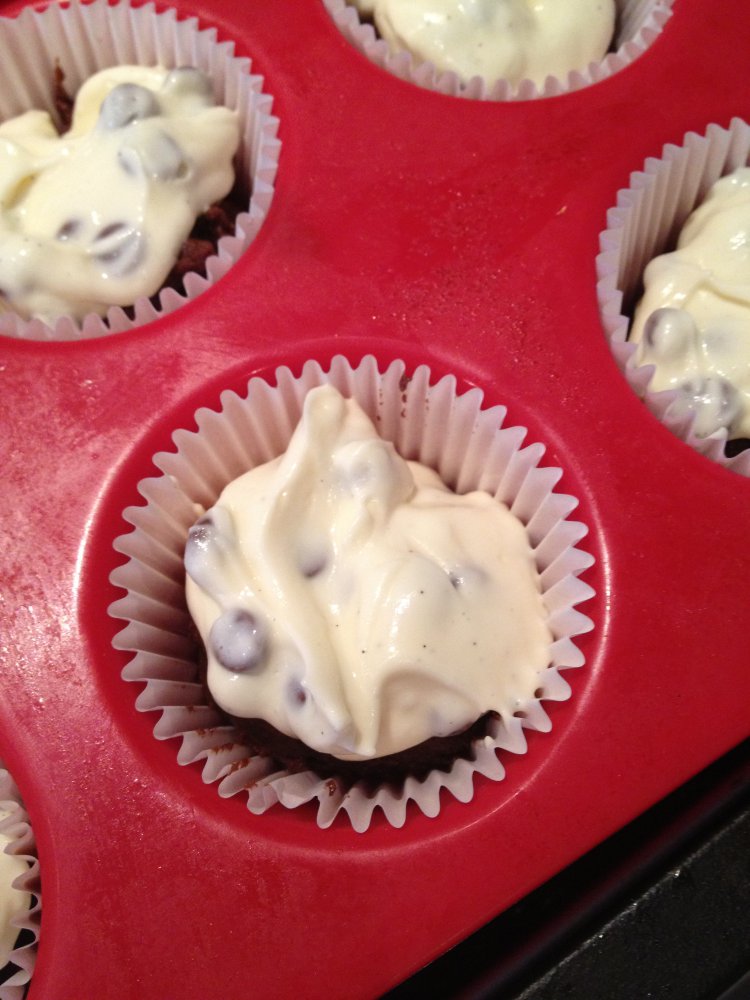 They are apparently done when they have an even gold colour on the top. I baked mine for longer than the 20 minutes (bearing in mind I have a hot oven, this is unusual) and still didn't get a golden colour on the top. 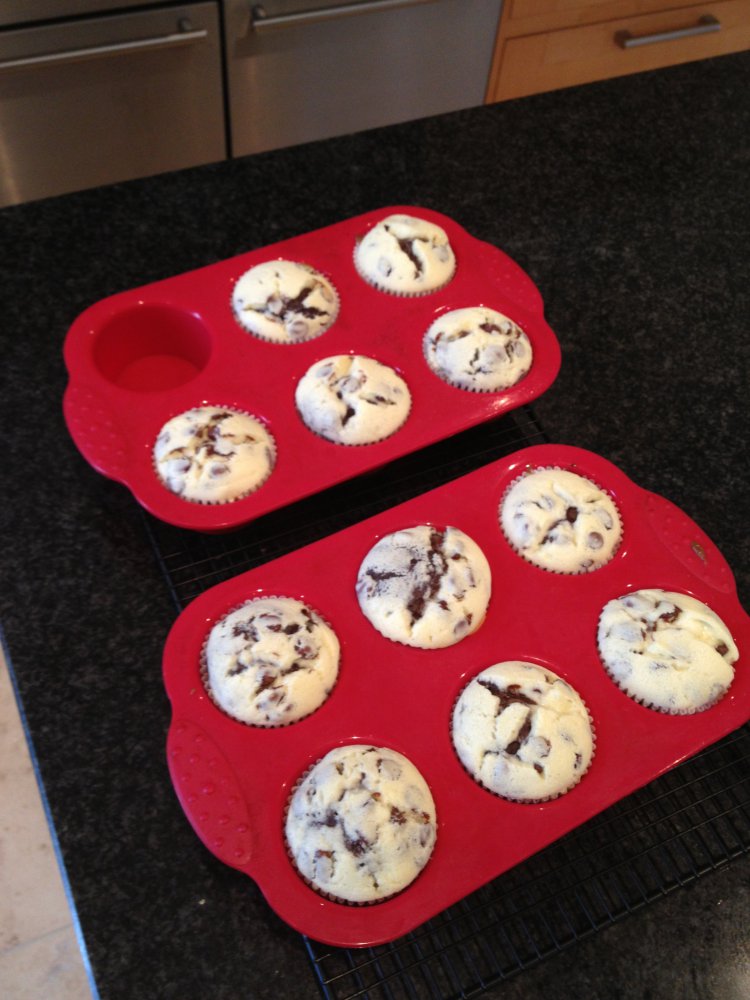 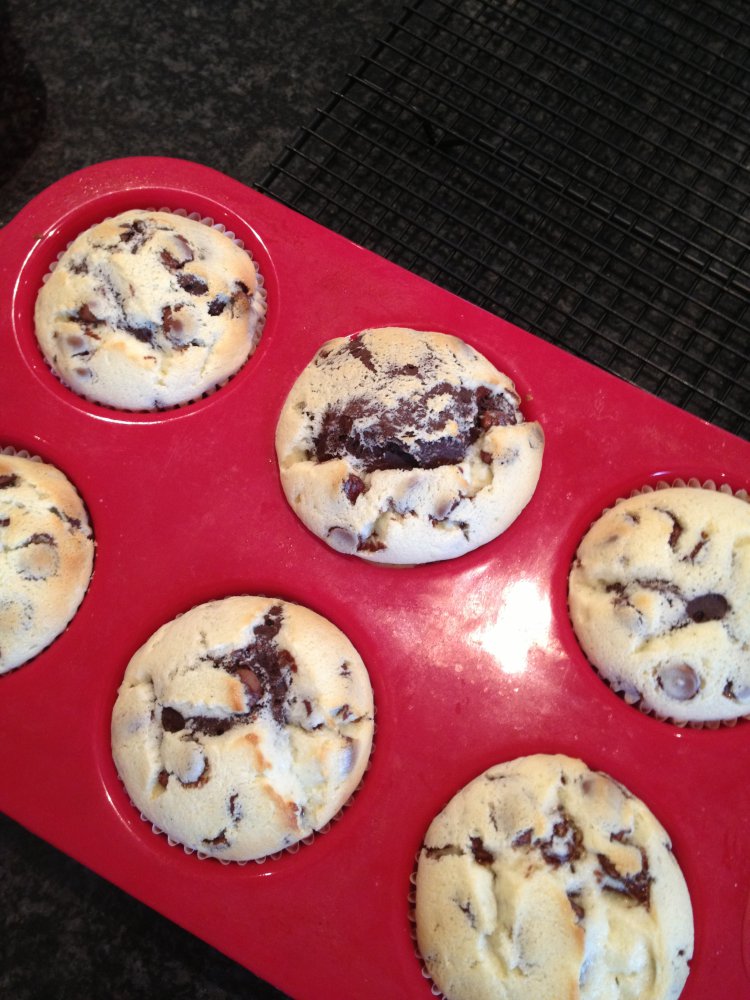 The chocolate sponge was VERY dense, as expected, and the foamy cheesecake mixture had melted to a very thin layer on the top. On tasting them, the cheesecake was actually very nice, but there was hardly any on the each one. The chocolate sponge tasted of practically nothing. If I had given someone a mouthful whilst they were wearing a blindfold I doubt they would have been able to discern a chocolate flavour at all. The texture was awful too. Given how terrible the results were we didn't bother frosting them - it would have been a waste! We did eat the topping off each one though!! 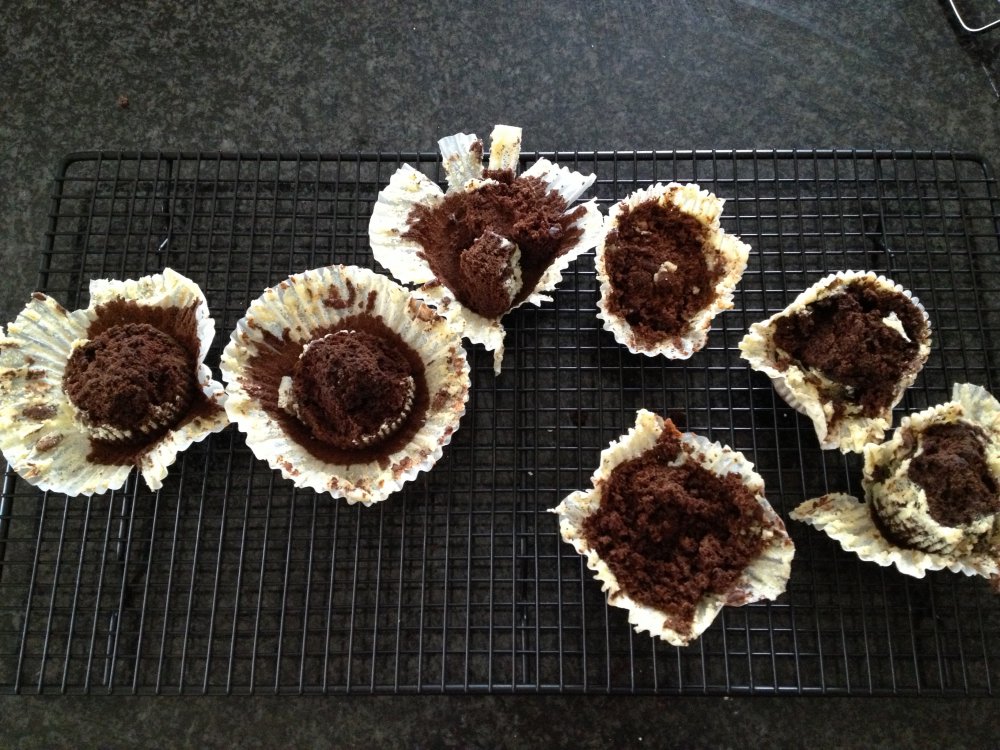 You can see from the photo how dry and dense the sponge is.

After making them, I was obviously very disappointed at how they turned out, and had a look online to see if people have had similar problems - and it turns out it is not just me. In fact, the Hummingbird Bakery website has a FAQs about their recipes, and the Black Bottom Cupcakes have clearly proven problematic:

"The mixture for my Black Bottom Cupcakes is really thick and doesn’t pour easily. Have I made it right?
Don’t panic, the mixture for Black Bottoms is supposed to be thick. It almost resembles uncooked brownie mix and the sponge is much denser than our Chocolate Cupcakes. As we say, don’t judge a sponge until its baked! They should still be moist, so if they turn out dry and the ingredients are to the letter it will probably be due to overcooking. On the other hand, the cheesecake mixture is relatively runny. Wait and see how the final product turns out as it is very hard to tell in the early stages.
Should the chocolate sponge be gooey in the middle?
No, it should be cooked all the way through. Test your oven temperature with an oven thermometer and ensure that you cook the sponge for the appropriate length of time so that a metal skewer comes out clean.
Where do you put the cheesecake mixture?
Simply spoon it on top of the chocolate batter. There’s no right or wrong way; it’s what it tastes like that counts. All our Black Bottoms turn out differently, but they look the same when frosted – it’s all about taste!
The chocolate sponge doesn’t taste very sweet. Have I made it right?
Yes, our recipes are correct as written. The richness of the dark cocoa sponge is meant to work well with the slight sourness of the cheesecake and the sweetness of both the chocolate chips and the cream cheese frosting.
The recipe doesn't include water in the ingredients list but it is included in the recipe. Is this correct?
Including water in the ingredients list is a choice made by the publisher and will depend on their house style. When it comes to cookbooks, many publishers don’t class water as an ingredient and choose to omit it from their ingredients lists. We agree, it can be a little confusing, but it’s one ingredient most home bakers will have in abundance!"
Click to expand...

It's really disappointing that they have defended their recipe rather than taking on board the feedback from the public.

A lighter, richer-tasting sponge (made with egg and butter!!) together with proper cheesecake would be lovely. I'm really keen to come up with a working recipe for this - watch this space!!
Ad

Interesting post! I'd heard of the Hummingbird Bakery book, but haven't gotten it or tried any of the recipes. That must have been disappointing. It seems to me if the company has to have a FAQ about their book, perhaps a second edition with corrections is in order.

That's the thing though, there have been new editions out since the recipe first appeared and they have stood by their recipe despite the problems people have had with it! Very strange indeed. I'm still keen to come up with an alternative, but time seems to be against me at the moment!

I'd take a crack at it myself, except the weather finally warned up here. Maybe if it cools off after the predicted rain.

That was an awesome presentation. The picture looks really yummy, and just made me hungry for some cupcakes. I wish you luck on your recipe. I have never tried those but I want too. I will look online and see if I can find a good recipe for chocalate sponge cake. I do believe you could replace the recipe slightly for the sponge cake, and use the original cheese cake part of it. Good luck!

Ok, since the weather cooled off again yesterday we were able to bake not one, but two versions of this cupcake! The first one we tried adding an egg, but it still didn't come out nicely. The second time around we added an egg, and half an ounce of melted baker's chocolate and it was much, much better. They still didn't rise much and were rather dense, but they had a much nicer taste and texture.

I have to suspect that they deliberately aren't giving the correct recipe in order to keep other bakeries from recreating them. Much like the way dictionary companies would insert false words and mapmakers would insert fake geographic features in order to see if anyone was copying their work.
Ad

Thanks so much for giving it a try, interesting to hear that egg and chocolate work (it definitely needed something to give it more substance and flavour!). I must give it a try sometime soon...

Does that new book also have cupcake recipes? Anything else of interest?

There's a lot of stuff that look good - here's a link to the book and list of recipes: http://hummingbirdbakery.com/cookbooks/home-sweet-home/

I'm giving a couple of recipes a try today - the Cinder Toffee Cupcakes and the Chocolate Ginger Cupcakes. I'll let you know how they go! These cupcakes are not 'filled' but quite a few of the recipes in the book are for filled cupcakes. When the sponge is done you cut out a small part in the middle and fill it with something yummy and then put part of the cut away piece back on top before you frost them. For example, the Jaffa Cake cupcakes are filled with orange marmalade and topped with chocolate buttercream - yum!

Jaffa Cake cupcake? Sold! I've been experimenting trying to come up with one after eating many many jaffa cakes (bought at Myers of Keswick in New York City. But what's the "cinder" in the cinder toffee cupcakes? (I hope it's just something like cinnamon...)

Cinder toffee is honeycomb - it's not called that everywhere, mostly in the north of the UK I think. Both recipes were delicious! I'll post a separate topic
Ad

I used a recipe for something similar, but with a devil's food cake base. You top off your muffin pans at 2/3 full, then use a pastry bag to pipe in the cheesecake mixture inside the chocolate batter. I did these in mini sizes, and used a teaspoon to "indent" the chocolate batter first before pouring the cheesecake mixture. It still overflowed, but I got a couple of pieces that looked as it was described -black bottom cupcakes. I used the recipe from smitten kitchen, as adapted from the David Leibovitz site.

Here's another person who tried the recipe and had to modify it:

I've heard a lot of dodgy reviews about Hummingbird's recipe books - I was going to buy one a few years back but the low ratings on Amazon put me off. Perhaps this is one of the main offenders!

I like the idea of topping it with the cheesecake topping before putting it in the oven - I've never seen that done before. Surely it would be easy enough to find a good chocolate cupcake recipe that you trust then just adding the topping to that? Would probably be much scrummier and it wouldn't ruin the authenticity!
You must log in or register to reply here.