We all get awesome wedding gifts. One of mine forty years ago was a Farberware coffee pot. It was an 8 cup perk and it cranked out wonderful coffee for a year or so. It met its' demise through Babcie, my mother-in-law. She was a devoted instant coffee drinker. So, the weekend that my parents came to visit, she filled the Farberware with water and put it on the stove to heat the water. She wanted us to have fresh coffee when we got up but confused the two methods of making it. My dad was first up. He hit the top of the stairs and smelled the acrid odor of the burning pot, flew down to the kitchen, grabbed the pot and flung it out the back door before it burst into flames. The pot got replaced before the weekend ended, but Babcie never attempted to use it again.

We continued to use this pot for years. Morning coffee together was a ritual and important to the start of our day. But my husband was an aficionado of new products. Eventually, the Mr. Coffee came out. I received one as a birthday gift, but before I could return/exchange an item that I really did not want, he opened it, tossed the box, and proceeded to make the first pot. It was passable coffee. But you know about these pots. The first cup is good, but the successive cups get bitter and the pot does not hold the heat. I put up with it for as long as I could before the Farberware came back out of the closet. Mr. Coffee went on the yard sale table.

Fast forward through those forty years. The husband is gone, the house cleared of children, and I'm home with my Farberware product. I replaced the 8 cup somewhere along the line with a four cup version. But my tastes have changed. I no longer need that 2-3 cup jolt of caffeine to start my day. I cut down the amount of water to just those two cups and even then tossed half a cup. Maybe it was time to move on.

I have an awesome sister. She knows what I need or want before I do. She gifted me with a Keurig K40 for Christmas. With its' single cup dispenser and no reservoir for the water to get stale in, it seemed perfect. I could make a cup and ignore the second. No fuss, muss or waste. I bought reusable pods so I could use my usual coffee brand, and could control how strong to make the coffee. It was perfect. It was perfect for about three months. After a while, the coffee seemed weaker so I justed added more grounds to the pod. Then I noticed that I could slug it down in one gulp without burning myself. So I started putting it in the microwave to heat it up to the right temperature.

Now, this was wrong. Three months use and it was running out of steam. So I called the Keurig helpline. These guys are wonderful. They lead me through the process of cleaning the machine and retesting the pot. The trouble was that the water was not heating up enough to run it through the grounds. So, I was getting weak cold coffee. Their answer was to send them the jigger that holds the pod, making it unusable, and they replaced the K40. While waiting for the new arrival, the trusty Farberware made it back to the counter.

K40 number two arrived about a week later. It had the same problem, only it happened much sooner than it did with number one. I made the call to the help line, went through the process of cleaning the pot with the representative even though it had hardly been used. I sent back the jigger that holds the pod, they sent me number three.

Wouldn't you figure that the problem would be solved? Three times is the charm, right? Well within a week, K40 number three developed the same issue. I called the help line again. This time he wanted me to purchase and clean the machine with their special coffee pot cleaner and get back to them. It took a day or two to find some, but I did as asked, even though the pot was less than a week old. It did not help.

As this was the third K40 that went south, the representative authorized upgrading my coffee pot to the K45. Bigger so it takes up more counter space. It has a reservoir on the side, but still has an interior reservoir that you cannot empty. It just sounds nasty to have that there, but I had control of the outside reservoir. I had a friend visiting who loved his coffee, so we made up a couple single cups to enjoy that afternoon. I had it programmed to shut off when not in use. As we sat and visited, a strange acrid odor came into the room. Investigating the kitchen, I saw that the K45 was now smoking. The auto shut off had not worked and the house could have gone up in flames had I not been right there. This was unsettling.

I called the help line again, but this time when he wanted me to clean the machine, I got testy with him. I saw no reason to clean a machine that was burning up and had been used just the one time. He saw the reason to my objection and had me return the whole thing this time. No cutesy little pod holder - the whole dang thing. Have you ever tried to put one of these odd shaped things back in their packing? It took the two of us the rest of the day to figure that out.

So, now Keurig number five has arrived. It's another brand new K45. It works perfectly, giving cup after cup of freshly brewed coffee. And you know what? I don't like it. There is something about the taste that is different. I tried to get used to it, but I guess at my age, change is sometimes difficult. The K45 has gone back into the box and the Farberware perks my morning coffee again. I guess the K45 will end up on a yard sale table some day.
Ad

I totally agree if it ain't broke don't fix it.

Like you I only want a cup of coffee in the morning. Making even a small pot of coffee ended up in a lot of waste.

I started using a single cup pour over with a reusable filter inside. I use a little scoop to dump the coffee into the filter, pour water over it and walk away. In three minutes I have a cup of really good coffee. I bought it at target. I get great coffee, easy cleanup, and easy storage.

Funny thing at the fancy-schmancy coffee house in town where they charge almost $5 for a cuppa coffee… They use the same thing to brew each cup.

From time to time I will brew a full pot. I take my one cup out. I then pour the rest in a small pitcher. I add sugar, half-and-half, and vanilla to taste, then place it in the refrigerator. It taste just like those bottles of chilled mocha vanilla drinks by Starbucks that they sell in the grocery store for $3 to $4 a bottle. I make mine for maybe 50 cents a serving

I love coffee too. I live alone, so there is no reason for me to have a coffee maker that makes a huge pot of coffee.
I came across a mini coffee maker, that had a 4 cup pot, but that was just messy. And it was white. I hate white.

I wanted one of those "pod" machines that took Kcups and also had a basket for grounds, so I could make what i wanted and use what I wanted without having to make a big pot of anything.

I'm an ebay shopper. I found a really nice Hamilton Beach Flexbrew on ebay for $30, so I grabbed it.

I love it! It uses Kcups or grounds. I can make coffee, tea, hot chocolate, or whatever I can get in a Kcup.
AND its in black!!!

I wouldn't have anything else at this point.

I've worked at some places that have Keurigs in the breakrooms. Pieces of garbage if you ask me.
Hard to clean, constantly break, break easily, and you NEVER EVER get the same amount of coffee in each cup.
Half cup this time, 3/4 cup the next time, 1/4 cup the time after that........but never a FULL cup!!!!
As my granny would have said..........."worthless junk made to sell".

The Hamilton Beach makes the SAME cup EVERY time. I'm giddy with happiness. 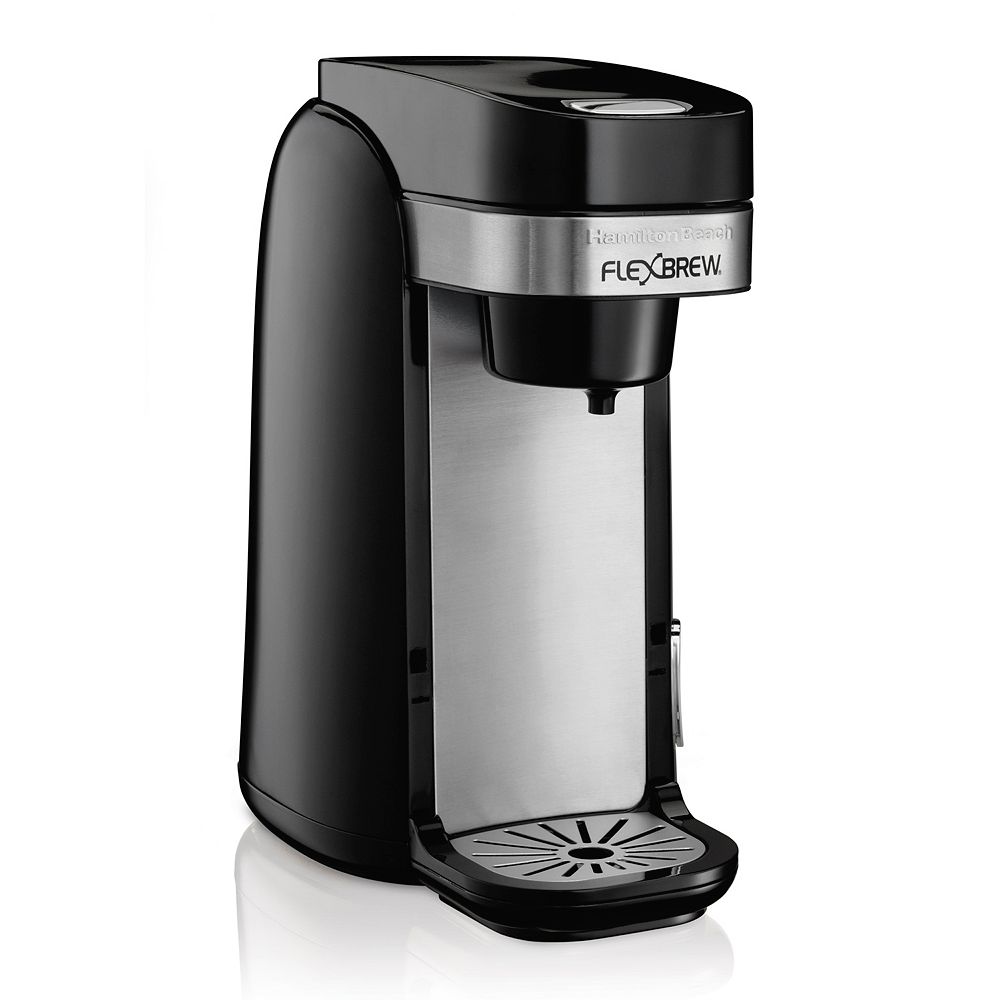 I might just try that Hamilton Beach appliance. I know these things are wear dated, so don't expect that the Farberware will last forever. They are pricey, though. Thanks for that idea.
You must log in or register to reply here.