Hi all this is my first post here, I'm devastated that a recent wedding cake I made collapsed..for context I've been making cakes for four years now and have made bigger wedding cakes than this..
The cake was a three tiered buttercream cake, 10 inches, 8 inches and 6 inches. the cakes were chilled in the freezer overnight and delivered to the venue for stacking the next day at 10am. the 10 inch cake had 6 dowels in it, and then the 8 inch cake had 5 dowels, with a central one that led up into the 6 inch cake. So it was pretty sturdy and it's how I have always stacked and dowelled my cakes in the past.
The venue when I arrived was a tent and didn't have any air conditioning, only one fan. I expressed concern to the venue manager and to the sister of the bride and we were looking to find a solution. By this point the cake was set up, it was past 11am so had been stacked for over an hour and it was standing fine (The picture I have attached is from 11am). The venue manager wouldn't let me put the cake in the service kitchen in case it was knocked by one of their staff, but I found attached to the tent there was a room that was the dance area, it was very dark and cool which was perfect. The sister of the bride and someone else helped me transport it a good 10 metres from where it was standing originally to the dance room, and we found 2 fans in there as well so I turned those both on and pointed them towards the cake. Whilst we were taking it from one room to another, I showed them that the central dowel for the top tier was poking ever so slightly out the top of the cake (I had covered it with flowers) but I was holding on to this to make sure it was stable whilst we moved it, and said that you'd need to do the same when moving it back for cutting.
I told them that it shouldn't be moved from here until they're ready to cut it. I was tole the reception was starting at around 3:30pm and after they ate it was planned they would cut the cake, so around 5pm? I then mentioned that I was told to come from 9am when the rest of the venue was being set up and if I knew that the reception was starting much later, I would have suggested coming later. The sister of the bride said that she thinks the bride just didn't take that into consideration when planning.
Like I mentioned, the cake had been chilled overnight in my freezer. But it had started sweating during set up during stacking but the buttercream was NOT going soft. So, I was content that leaving it with two big fans in a cool, dark room, would be fine, it felt like I was in an air conditioned car in the dance room so again I was happy that the buttercream would stay set and we'd moved it from one room to another without anything collapsing so all was fine.
The next day, I got a text from the sister of the bride, 'the cake fell. any solutions?'. obviously I was devastated. I had spent 4 days preparing that cake and had taken 3 days off from my full time job for this event. I asked for more context, a picture, what happened? I was sent the next picture attached. It just doesn't look like it was kept in front of the fans to me, it looks like the buttercream has started to go soft and it looks to me as if the top two tiers have been tipped? I feel like if the top two tiers had collapsed on their own, it would be leaning to one side, not tipping. I don't know, this is the first time this has happened to me, I'm sooo devastated. any advice? I'm going to ask for more context as to what happened and I think I should get in touch with the venue manager to see what their account is?

6 dowels for 10” is enough for barrel tiers. Barrel tires are twice the amount of cake, so need to use a dowel 1” of cake diameter.

Where you place dowels is important. They need to be far enough out along edge to support weight of cake to keep the edges of collapsing.

From the photograph, if I were to venture a guess I would say not enough dowels and incorrect placement (too far inside the cake).

The type of cake and type of filling matter.

When you are going with barrel tiers, you need a very sturdy cake for the bottom and lighter cake on top. A light fluffy chiffon or genoise cake a not be used for large tier cakes, especially, on lower tiers. You need a sturdy butter cake or pound cake. Heavy fillings need to be in bottom tiers.

Actually when I zoomed in on the photo, looks like the bottom of the middle tier collapsed. Not the top of the bottom tier.

So the bottom of the cake caving is a cake structure problem.

Too weak a cake

Too much weight on the tier

Any combination of these factors will cause a bottom collapse:
A poor cake formula is one that has too much of an ingredient that undermines the structure of a cake. All the ingredients are based on the weight of the flour. Wheat flour, egg whites, milk solids are strengtheners.

Sugar, fat, egg yolks, leavening, starches, and chocolate are tenderizers--so weakeners. So if there is too much sugar, fat or other weakened based on the weight of the flour, it will weaken the cake.

=======
This is an example of a poorly formulated butter cake recipe. This recipe has too much sugar. The sugar has caused the sides of the cake to slouch in baking. It just does not have the structural integrity to hold even while baking. As a single cake it will probably hold up. But a cake like this will collapse if stacked in as a tiered cake.

The reason a chiffon cake is so weak is the sugar is up to 135% to weight of flour; genoise contains up to 200% egg. Foam cakes are too weak to be used as large bottom tiers. Fine to use one as a small top-tier. I use them in 10” single 4” tall cakes. But nothing bigger. I learned the hard way they are too weak to hold even well doweled

A butter and pound cakes have a 100% (equal) flour to sugar ratio. You can go slightly above 100% with the sugar but not too much or you end up with a cake like the one below. 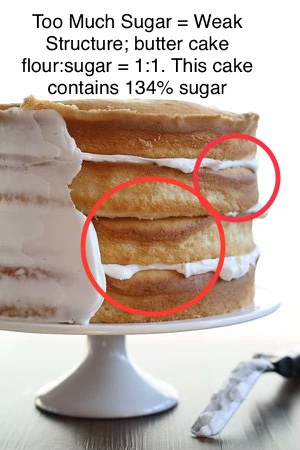 Thats why I stay away from those telephone pole looking cakes.
Once set up you should not move the cake, fans just make it worse faster.
in future get all the information about the venue, if its in a tent you have to stay away from tall buttercream anything.
You can't take an English style tall cake and change the insides to a french genoise style without losing the structural integrity that comes from using a dense cake.
i would not let a bride order a cake like that.