What non-baking tool have you used to bake something?

I enjoy being creative in the kitchen. So, I experiment with baking food with unconventional items. One of them is an omelet maker. I found out that you can pour muffin batter into this contraption and they cook in less than 5 minutes. 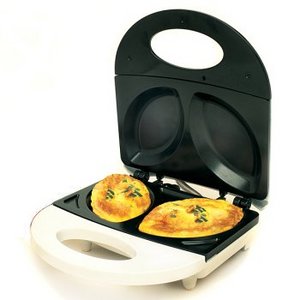 The omelet maker I use to bake muffins.
Ad

I used once my waffle maker machine to try to make some square-shaped cakes and while the experiment worked, texture was not what I expected, so I later bought a Betty Crocker's brownie and bread loaf machine to get six small cakes in a row.

I've used a sandwich maker to make waffles, triangular muffins and Jiffy cornbread. It's not fancy but sometimes you just want a quick fix of something sweet without heating up the kitchen.
Ad

I haven't tried it yet, but apparently Alton Brown said that you can use those terra cotta landscaping tiles in your oven as a makeshift pizza stone. Since they're only a couple bucks each, I've been tempted to give them a try for fun. The only comments I've heard from others about this method is that the tiles will break rather easily over time - but that is not as big of an issue considering how cheap they are.

Apparently you can also bake stuff in your electric pressure cooker. The cookbook that came with mine has a recipe for cheesecake in it that I also plan on trying. This seems to make sense since you typically need to include a water bath in your oven when making a traditional NY style cheesecake. I'm just a little worried about the cake exploding somehow from the high pressure, lol.
You must log in or register to reply here.