Sourdough starter and no AC

I have yet to find a way to keep a sourdough starter during the summer without AC. Are you there develop mold or the kitchen gets so warm I lose the starter to overdevelopment of yeast. Or this week it bubbles right out the container overnight.

I’ve lost three starters this summer already. Anyone have any ideas on keeping a starter in a warm house without refrigerating it? I don’t like refrigerating it since it inhibits the yeast development to the point you lose all of the sourdough flavor.

I’m really at a loss on this one. Started a new starter today and I would really like to be able to get a little bread baked in the next three weeks or so.
Ad

Have you got anywhere cool in the house you could keep it? A north-facing room maybe? Even when it gets hot here our downstairs always stays relatively cool, and the door to our utility room faces north so it's always nice and cool. I store stuff in there when I need a cool, stable temperature. That being said, I haven't tried making my own sourdough before, so I don't know how it would fare in there!

Becky said:
Have you got anywhere cool in the house you could keep it? A north-facing room maybe? Even when it gets hot here our downstairs always stays relatively cool, and the door to our utility room faces north so it's always nice and cool. I store stuff in there when I need a cool, stable temperature. That being said, I haven't tried making my own sourdough before, so I don't know how it would fare in there!
Click to expand...

Unfortunately there isn’t a cool spot in the house. The house is a 100 yr old wood structure so there isn’t any insulation. In winter it’s cold, in summer it’s hot. I just lost my 4th starter, so I’m giving up until the fall. It’s sooo frustrating.

You should move to the UK
L

If your sour dough is so active that is bubbling over the sides of the container, you have way to much in the container and it is way too warm. Now I think your issue is that your house is too warm, your sour dough doesn't have time to develop its' flavor before it over-developes why I say this is I have a sour-dough which I generally keep in the fridge 24-7 and it has lots of sour dough flavor. So I might suggest that you start with a smaller batch of flour and water, and maybe shorten the feeding time to 12 hours or maybe less which may allow you the chance of getting a sour flavor into your starter.

Leofric said:
If your sour dough is so active that is bubbling over the sides of the container, you have way to much in the container and it is way too warm. Now I think your issue is that your house is too warm, your sour dough doesn't have time to develop its' flavor before it over-developes why I say this is I have a sour-dough which I generally keep in the fridge 24-7 and it has lots of sour dough flavor. So I might suggest that you start with a smaller batch of flour and water, and maybe shorten the feeding time to 12 hours or maybe less which may allow you the chance of getting a sour flavor into your starter.
Click to expand...

I've always used the same about of flour and water for that container and that was the first time it ever bubbled over the top. I think it was the heat as the container was just about empty, the contents all over the counter. I've given up on keeping a sourdough starter in the summer. I usually start one in the late summer when it cools off, then keep it until the spring. I live in a vineyard; it seems as soon as they start plowing between the rows, my starter starts picking up spores, so i end up tossing it. I usually don't refrigerate my starter unless I am going to be away. But maybe I should give that a try next summer. So thats a good suggestion, thank you.
Ad

The fact that it spilled over the container even though you haven't change anything does suggest that your house is too hot, and the fact that you have vineyards nearby supports that argument. I am from Northernish Alberta, Canada and while we can have 35 Celsius days (95 Fahrenheit) in the summer they are rare, and in fact because our winters can be so dire - usually a couple of weeks of -20 degree weather, and -30 with wind chill is fairly normal, and our snow didn't leave until late April this year - 15 can seem warm. So I think your starter is suffering from being overheated when you try and develop it in the summer. what I would do is get a batch started and going in the fall or winter and than start refrigerating it as the temperature warms. In fact, unless I need a really active batch and I tend towards a mix of yeast and sour as my leavening as my family can find straight sourdough overwhelming, my sour comes out for feeding and goes straight back into the fridge! And it still has all the sour flavor one can handle.

Another question - what container do you keep your starter in? Mine is in a trusty tupperware container with a tight seal and I have kept it going for at least four years if not longer and has never developed mold! Again, I think heat is a factor but maybe your container? I never used glass jars because I had the sour escape in the past and the tupperware has worked very well for me so I am wondering if you are using glass and the glass is amplifying the heat? In the Masters' Bread courses I have taken, they used food safe plastic and avoided glass (they also didn't bother with purified water or grapes and such. The only two things they do differently from me is to discard 1/3 of the sour with each feeding (sometimes they were doing 2 feedings a day when they were doing a huge bake) and precise measurements (As I am a home baker - I tend to be very laissez faire with measuring...bad habit I know, but it works for me.)

Now Didier Rosada who has won numerous awards in France for his bread (and made a sour dough baguette that was so wonderful I dream of it years later) has worked in Central America and the warmer parts of France and is able to keep a sour going so there has to be a workable solution.

The container I use is a food service Cambro polycarbonate (see pic). I normally do not seal the container as I want the air to flow. I will place a paper towel over the top, then just set the lid on it without snapping it on. Some times I use cheesecloth. The feeding schedule depends on what I am making. If its going in a loaf like a panettone, then three feedings a day for a couple of days before mixing the dough to bring down the sour flavor. But for a loaf of bread, then a two feeds the day before.

I always change the container at each feeding. Living in a vineyard means there's a lot of yeast in the environment. And even though the yeasts that like grapes are not necessary the yeast strains that like wheat, I like to have a clean container so there's isn't too much yeast around my starter.

Lol, the measuring is a pain I admit. A starter is like having an infant--needs attend and feeding every day 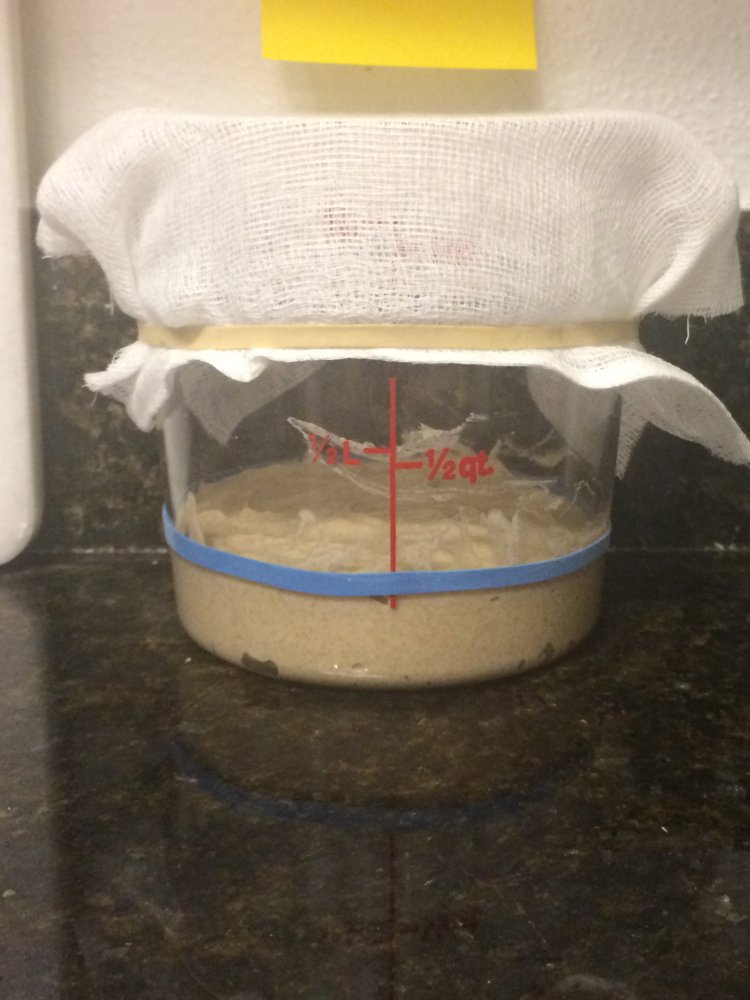 So I think your issue is way that your sour is getting way to much yeast! In the bread courses we always sealed the containers tightly as you don't any more microbes introduced. I also think you are feeding it a lot! Mine gets fed when it gets low - in fact she is a very neglected child who I ignore until I need her for bread and I tend to deplete her to almost nothing feed her and send her back into the back of the fridge. And I will confess to not cleaning the tupperware when I feed it either. I usually wash it out ever couple of weeks, unless she is getting frozen while I am away. Now we could also debate wet versus dry starters - I like my sour to be pourable, which works better for me.

I think you should experiment - do one sour with a tight lid, fed once a day unless you are baking with it and do you usual treatment of a sour as your control and see if that helps. Do you discard starter? I never do but I also tend to bake once a week unless it is really warm!

I feel your pain about allergies - nearly a decade on shoots in my childhood which means I don't get pneumonia every 4 or 5 months but I m still horribly allergic (albeit not deathly) to all sorts of wonderful and wacky things including citric acid!
Ad

@Leofric, yes I thing my problems with the sourdough starter is this house is just to darn hot. Interesting you like a pourable starter. I prefer my to be cohesive enough to pick up. Mainly because I mix my hand, so it makes it a bit easier and faster to incorporate it into the main dough.

I've always covered by container with a cheesecloth or a paper towel. I'm going to have to try snapping on the lid to see how that works. I was always under the impression that the starter needed air. But if you hare getting good results sealing the container, then I was clearly mistaken.

Allergies are so frustrating. People think I make it up...until they see me in a full blown allergy reaction. My SIL was surprised when she finally saw how bad it can be for me if exposed and I do not have any medication. My little niece said to me recently, "my mommy cleans up all the dust and keeps Sammy (the cat) out before you come over so you won't be sick." The strange thing is I did not have allergies as a kid. My doctor said most kids out grown allergies; and the majority of adults with allergies develop them as young adults. And those who develop them later have more severe cases. Aargh!

I'm not surprised to hear your allergic to citric acid--the vast majority of it not natural from fruit, its made from mold. I used to date a guy who had a terrible allergy to citric acid. It would trigger migraines so bad he'd lose his vision and start vomiting. That stuff is poison, and I don't mean that facetiously.
You must log in or register to reply here.