Do you prefer trendy or classic kitchen tools?

When I grew up, my mother taught me how to whip meringue by hand. (And yes - we did have an electric blender.) Afterwards, my arms were stiff. She was always a fan of baking via old school methods and with classic kitchen tools. I am, on the other hand, completely different. I prefer using the latest greatest gadgets.

Which do you prefer - trendy or classic kitchen tools? 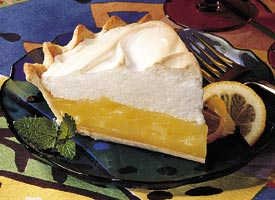 (The meringue I whipped was for a lemon meringue pie.)
Ad

I like the classic methods and like you, my mum would teach me how to do things her way. Apart from a blender I think the old school methods have a better connection with the food you're making, that goes for any other type of cooking.

For the most part I am a fan of the classic tools, but I would have to draw the line with the hand whipped meringue. i cannot whip cream or egg whites by hand for the life of me. It's not because my arms are weak, it's just because I have like no coordination what so ever. It's really hard for me to move my arm in a repetitive fashion fast enough. I keep getting out of sync.

Otherwise I've found that many of these modern gadgets are often a waste of money. For example I bought these silicone cups for poaching eggs. They seemed clever at the time, and simple enough that there's nothing that could possibly go wrong with them. I liked the idea of the egg not spreading out too much in the simmering water. When I finally tried them out, not only did the eggs take forever to cook, they stuck like crazy to the silicone. It was also tricky to drop the egg into them without them tipping over.

I still use an old dowel rod that my grandmother originally baked with, as my "rolling pin".

There is no way my arms, wrists or fingers could handle whipping meringue. My arms are way to weak for that as, it takes about all I got to mix a cake or something. I will always use a mixer as it is the lesser of two evils (the vibration makes my hands numb). I want to buy a Kitchen Aide so bad. It would make baking so much easier.

We saw those Eggies in the store once, at an unbelievable price. Should have realized why they were so cheap; they were horrible.

What kind of trendy gadgets are out there? We do use a rice maker, since, there is something about fail proof rice (that you can walk away from). That's about it though.

I love trendy gadgets. I think I have an addiction to cooking gadgets. Unfortunately, I had to cut back on the amount of money I spend out gadgets. It's good thing that I do know how to use classic kitchen methods.

My niece loves to cook with me. I teach her classic methods first. Then I show her how gadgets can make cooking easier. She's only 10, but prefers the classic methods.

I prefer the more old school approach to baking (and even cooking) because to me it is an "if all else fails" approach to being able to complete a recipe if one of your gadgets goes out. I also think it requires a deeper understanding of the recipe. I will say that some of the fun colors of the trendy kitchen tools always tempt me.
Ad

I do use a lot of gadgets in our place to speed things up, but our some of our kitchens do look rather old fashioned. I love the old classical look, but I do mix it up with some new, trendy things as well.

I like kitchen gadgets and colorful kitchen stuff. The only thing I actually prefer to do the old fashioned way is making bread because I get more of a feeling of accomplishment from making bread by hand than I would from a bread machine.

ACSAPA said:
I like kitchen gadgets and colorful kitchen stuff. The only thing I actually prefer to do the old fashioned way is making bread because I get more of a feeling of accomplishment from making bread by hand than I would from a bread machine.
Click to expand...

Agreed, I really like some of my stuff to have nice bright colours. Most of our actual cutlery are have colourful handles.

I really like a mixture of both. There are many modern day gadgets I can't live without, but using an antique mixing spoon or bowl is also fun too. My mom has an antique ice cream scoop that I am dying to get my hands on as soon as she ever decides to part ways with it!

The only thing I've tried whipping up manually was whipped cream and even that was taxing. I do like the classic kitchen gadgets though and I plan to have them in my own kitchen very soon.

There are a lot of trendy gadgets on the market, and I won't deny I love looking at them (all the pretty colors!) and imagining what it would be like if I had the money to buy them all. The downside to them is that they might make you lax in the kitchen. One I found particularly hilarious was a sort of suction bulb shaped like a fish, and it was used for separating the yolks from the egg whites. Eggshell halves always worked for me.

I plan on investing in a good mixer though. I love making bread and pasta but my arms hate me for it.
Ad

I'm an old-school cook, haha! I guess that's just how I was taught. I do like all of the really convenient tools that they have now, but I already have enough cookware in my house!
B

I strongly prefer classic kitchen equipment. I've tried the new stuff, but I really don't like it as much as the originals. Definitely sticking to what I was using! There's no need for change, right?

Both please
I like the sturdy dependability of classic cooking tools and I am also attracted to shiny new gadgets that make cooking task easier and sometimes fun.

I have experienced both worlds and even do i enjoy them both i think my preference lies with trendy kitchen gadgets as it makes life in the kitchen so much easier for me and i am more able to complete most of the dishes that i prepare more quickly.
K

In my kitchen, BOTH have their place.
Ad

I worked with a guy who everytime i was whipping something he'd come over and say " I could whip that faster by hand", I'd laugh and respond " yeh but I'll be having a coffee and reading the newspaper at the same time you're furiously working up a sweat".