In making the crust

1. Mix the flour and salt using a balloon whisk.
2. Add butter and shortening then mix again using a pastry mixer.
3. Add cold water one tablespoon at a time while mixing the ingredients.
4. After completely mixing the ingredients, divide the mixture into two equal parts.
5. Flatten each dough and roll with a rolling pin on a flat surface until they’re wide enough to fit an 8 or 9 inch cake pan. Make sure that you sprinkle flour over the flat surface so the dough won’t stick or you can use a silicon mat instead.
6. Arrange the first dough over the cake pan to serve as the base.
7. Set aside the second flattened dough. You will need it after you arrange the filling in the cake pan.

1. Heat a saucepan, pour the milk on it and let it boil.
2. Add the granulated white sugar then stir.
3. Add the young coconut meat and cook for 3 minutes.
4. Add the cornstarch which has been diluted in young coconut water then thoroughly stir while cooking until the texture thickens.
5. Turn off the heat and let the mixture to cool down.

1. Preheat your oven to 375 degrees Fahrenheit.

2. Carefully put in the cooked filling in the cake pan.

3. Put the second crust over the filling then seal the sides.

4. Make some holes on the second crust using a fork to serve as exhaust vents which will prevent the crust from deforming.

5. Bake for 45-55 minutes or until you see that the color turns golden brown. Baking time sometimes varies so make sure that you check the color of the crust to determine if your pie is completely baked.

6. Let it cool down then serve. 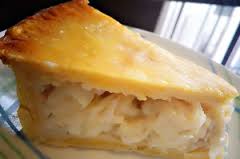 Well I have never really been the biggest coconut fan out there, but then again I have never had a young coconut, so maybe I am missing something. I really have no idea if there is a difference, but if I would want to find out I would want to do it via a pie, so that works. Thanks for sharing.

I doubt that we'd be able to get young coconut here, but I wonder how much of a difference it makes? Coconut is absolutely one of my favorite flavors. I have never seen a pie like this here, it is made somewhat like a different type of fruit pie, such as apple, blueberry or cherry. The only coconut pies I've seen here are coconut custard, and they are one crust pies, with the crust on the bottom, and no top crust, but I have to say, that picture looks yummy.

There is a place south of Manila where we buy the best buko pie. However, there is always a long line to the counter so we are not always successful in buying because we cannot spend 30 minutes of waiting. We love buko pie only when it is freshly baked. And we don't buy those being peddled on the road because they are usually spoiled when you reach home.

Back to the baking of buko pie, I don't think I have the energy to bake that. It looks like complicated to me especially the making of crust. But I am willing to do a taste test on the finished product.

@rz3300 and @Diane Lane If I compare young coconut and the already aged one, the former is much softer and slimy just like jellies do compared to the hard and thick aged coconut. The young coconut is also thinner and sweeter that's why they're preferably baked in their original form. Baking them this way retains their original taste.

gracer said:
@rz3300 and @Diane Lane If I compare young coconut and the already aged one, the former is much softer and slimy just like jellies do compared to the hard and thick aged coconut. The young coconut is also thinner and sweeter that's why they're preferably baked in their original form. Baking them this way retains their original taste.
Click to expand...

I think I have seen a type of coconut jelly product at the Asian markets in Houston. If I remember correctly, it's sold in a can. I wonder if that could be substituted? I haven't been there in a long time, and the neighborhood has deteriorated, but I'm sure at some point, I'll come across it elsewhere, or perhaps online, and if so, maybe I can try using that in this type of recipe.
Ad

@Diane Lane I do think that coconut jellies could indeed serve as an alternative to the fresh young coconut since they also have jelly like textures when they're very young. I can't wait for you to try it out soon.
You must log in or register to reply here.