I am just starting on my baking journey. My birthday is coming up and I’ve asked my husband for a stand mixer. Trouble is without spending a fortune on a KitchenAid, I don’t know what is the best type to look at. Looking at starting with making cakes and cupcakes, maybe having a go at pastry too.

It depends on what you really want/need, and what you want to accomplish with a stand mixer. Kitchen Aid isn't necessarily the be-all end-all in many regards. Among the hardcore baking enthusiasts you'll hear a lot of dislike and criticism (and outright ridicule) of KA. However, there's also a lot of reasons they're so well regarded beyond ridiculously aggressive marketing.

My personal opinion is, unless there's a specific need you have that isn't met by it, you could do a lot worse than getting one of the smaller Kitchen Aids. Refurbs are available routinely including direct from Kitchen Aid. Closeouts are frequent on individual colors because they have so many one-time seasonal colors to discontinue. Attachments, bowls, accessories, beaters etch are available easily which isn't an insignificant perk. Repair parts are available fairly readily if you have a place that could do repairs, etc. If you are baking a lot, or baking things with multiple parts (say cake/cupcakes with a batter and an icing) multiple bowls are going to be the single best investment you ever make. Don't buy a mixer you can't buy additional bowls for readily if you're going to use it often! I often have several bowls "in the air". One prepping batter, one prepping buttercream, one whisking dry ingredients to pour into the butter/sugar creaming bowl to make the batter... Multiple bowls add up in cost, but they are invaluable over time!

Bread bakers, bakers that work with dough all the time, tend to hate KA, and see it as more marketing than performance, at high prices. The Tilt heads are not very good at dough beyond a single loaf of white bread. The bowl lifts have their good and bad moments. They're not amazing dough machines, but they'll get the job done unless you're doing a large batch, dense dough, a lot of WW.

For pastry, the tilt head KAs are going to be fine if that can work into the budget. They're fairly malleable doughs with a lot of enrichment, typically no whole wheat, and typically not huge batches and you don't knead them extensively. Where even the big bowl lift KA's fall down is a 1000g flour 50% whole wheat 60% hydration sandwich bread. Or worse, a double batch of that!


I'm not sure what else you're going to find that fits the budget better than the 5qt or 4qt KA's on sale/refub (which should be easy to find.) Cuisinart & Viking make ok mixers. Personally I'd prefer the KA if only for the accessory/parts availability. A bit more "down-market" is the Sunbeam stand mixers. There are some bakers that swear by those above the KA. I don't see it. I had one back in the day and always saw it as a compromise. They work more like a hand mixer and a spinning bowl than a planetary mixer. They're definitely good for what they are, but it wouldn't be my pick unless it was the only affordable option. Still better than a hand mixer!

There's another option of Kenmore stand mixers....if I'm not mistaken the tilt-head models actually are made by Whirlpool and the internals actually *are* KA with a different chassis. I believe KA attachments actually work on their attachment hub. That's of debatable value. They're good machines at decent prices, but Sears/Kmart isn't exactly in the best position right now....so it could be a dead end for parts later.

I would say try to find a KA Artisan (or one of the smaller ones)...it's a decent machine with a good reputation and ample accessory/parts availability that, at the right price shouldn't be wildly different from anything else in your budget. So long as you're mostly interested in batters/creams or very light dough work like occasional single white loaves or pastry dough, occasional sugar cookie/pie dough.. Single batch pasta should work ok, but not more. If you were going to be heavily into dough kneading, I couldn't recommend anything less than a bowl lift KA in good faith, and even those would be barking up the wrong tree if you were really into dough. If budget just won't allow, or preference leans against KA due to their excessive marketing, I'd honestly go with whatever the budget allows. There's really not too much on offer out there at lower price points due largely to KA's dominance of mindshare combined with the fact they've filled out the whole price range now. Most of the competitors play in the same price ranges and comes down to aesthetic or brand preferences more than real advantages (I.E. you just NEED that Viking countertop appliance to match all your Viking appliances. For some people their mixer is a showpiece more than a work tool. Like polished marble counters. They look pretty as long as you never use them. ) If you REALLY need cheap, Sunbeam is probably the only realistic choice. I don't mean to make it sound like a consolation prize, some people even prefer them, but it's the budget option, and probably the best budget option in terms of long term support (they've been making them in some flavor since the 50's.

I had/have (It's in storage) a KA Artisan. It was a pleasure to use, and did the things I needed of it at the time. I had that Sunbeam years ago, and all I remember is chocolate chip cookie dough (or was it sugar cookie?) pulling the bowl off the spinning platform now and again (maybe they improved that. That was a long time ago.) I've the KA 600 bowl lift. That is my most used piece of kitchen equipment other than the refrigerator and sink. It's not perfect, but it does most things very well, and I try to use it as my first choice. It's my workhorse. I also have an Electrolux/Ankarsrum Assistent. They very expensive dough-centric mixer everyone raves about (Assistent, Bosch Universal, and full commercial mixers really are the only realistic options for the dough-obsessed.) To be honest, I prefer my KA most of the time. If this were a bread forum I'd be laughed out the door for saying that. The Assistent is very very good for what it does, but in my eyes, it's a dough kneading machine. The KA does most things very well and is convenient, but struggles with dough (dense pasta dough has it moving in stops & starts, and always sounds like it will strip a gear. I had one that did, but that model was an early design 600 that used plastic where it should have used metal, and they fixed that.) The Assistent can awkwardly be made to do just about anything, as well, but it really shines at dough alone. I use the KA 600 for almost everything, and bring out the Assistent when I'm doing a big batch of dense, heavy dough 5# pasta. 2kg bread. 800g whole wheat bread, etc. (Yes I'm mixing metric and imperial...) The KA does my 1kg French bread with ease. That's the bowl lift. The Artisan....I think it could handle 500g......1kg would be debatable. It might do it. As long as you're not doing that all the time. The Sunbeams, I don't think I'd try that. Keep it with batters and it'll be fine.

With big batches and dense goods, the bowl lifts have a thermal cutout on the motor and can be pushed as hard as the drive train allows without TOO much risk of burning up the motor. Don't do that with the tilt heads!! Tilt heads do not have a thermal cutout, they have sacrificial worm gears (plastic gear) that strips by design if you overload the machine to spare the motor. ) You really shouldn't push bowl lifts too hard either. Maybe the motor won't easily burn up, but you can still break a gear, even if it's tool steel.) Assistent/Bosch sidesteps that problem by using a belt driven transmission and a less aggressive design. Big commerical mixers sidestep it by having huge gears and a a gear shift transmission instead of variable speed motors.

Now - You asked which mixer to buy without spending for a KA, and you got an answer telling you "how to use a KA" and about big dough mixers that cost even more. The reason for that is to give you an idea of what's how there, how it's used, and how it compares in usage. That can help you gauge what you need, what you can afford, and what compromises and considerations to make from there.

Hope this helps rather than confusing things more!

RachH18 said:
I am just starting on my baking journey. My birthday is coming up and I’ve asked my husband for a stand mixer. Trouble is without spending a fortune on a KitchenAid, I don’t know what is the best type to look at. Looking at starting with making cakes and cupcakes, maybe having a go at pastry too.

if you’re just learning to bake I would recommend holding off on purchasing a stand mixer.

Until you understand the fundamentals of baking, such as what creaming butter and sugar is, (it’s mechanical leavening not mixing sugar into butter), and how to do it correctly using the correct temperature of butter, then It makes no sense in investing in baking equipment

The stand mixer is an important part of any bakers equipment. what’s going to happen is as a novice Baker you make an investment of $150 on a different brand today. Eighteen months later your skills improve dramatically and that mixer is not going to provide you with the options and capacity you’re going to want and need.

RachH18 said:
I am just starting on my baking journey. My birthday is coming up and I’ve asked my husband for a stand mixer. Trouble is without spending a fortune on a KitchenAid, I don’t know what is the best type to look at. Looking at starting with making cakes and cupcakes, maybe having a go at pastry too. 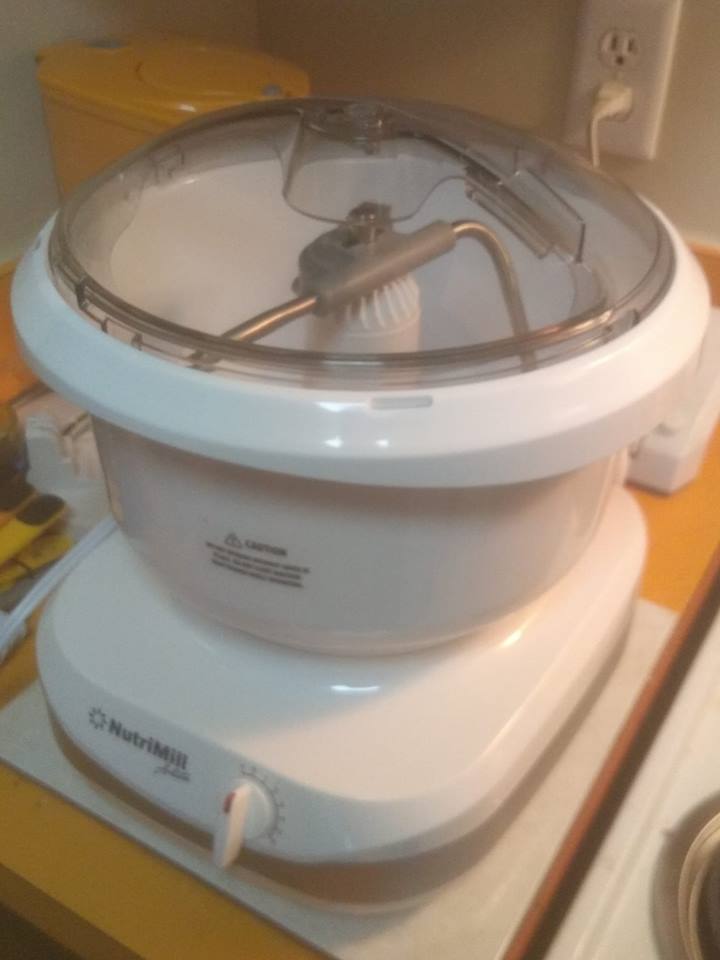 I don't like KA. Ever since Whirlpool bought them out, they made them flimsy & cheap.
Without spending too much money, may I suggest getting THIS mixer? The Nutrimill Artiste. It's very sturdy An can handle up to 10lbs of dough, has a 650-watt motor. It's almost like the Bosch Universal, but slightly smaller. I have one, & it's a powerful monster!!
You must log in or register to reply here.